Still waiting for that retainage payment? 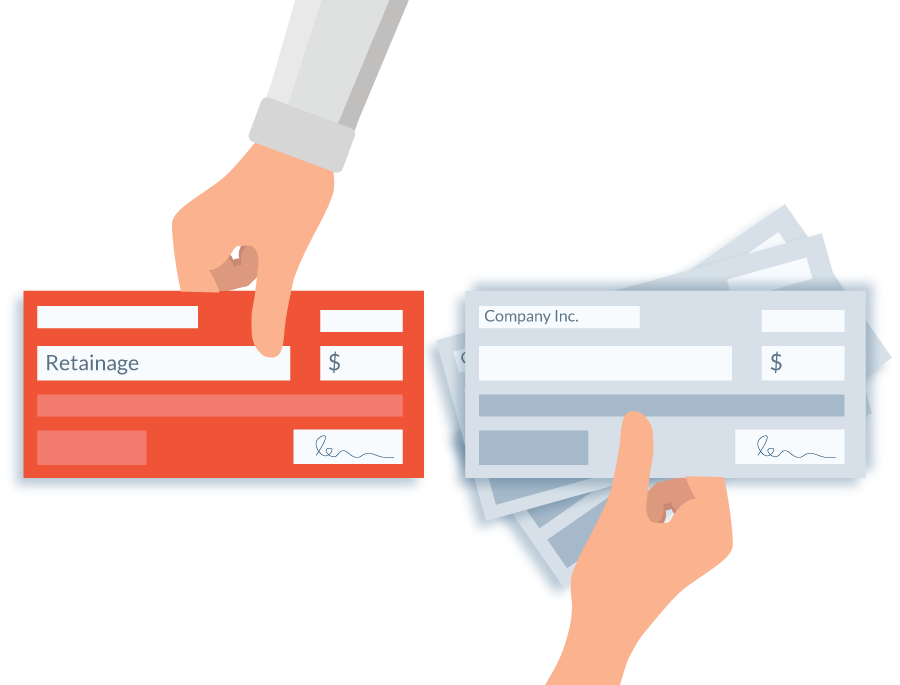 Have questions about retainage on your job, or retainage in general? This is a tricky area of law that can really impact your job, your cash, and/or your job risk. Learn everything you need to come out alive!

Retainage rules are different all across the country and the world. Use our color coded map to learn about the retainage requirements that may affect your next job.

Too often, contractors wait a long, long, long time to get paid the retainage withheld on a job. Sometimes, you need to make a specific demand to get retainage. Let's help you with this!

A construction project’s retainage is set by the construction contract between the parties, in which both sides agree to some percentage withheld from each progress payment.

Read the most comprehensive explanation of retainage and how it works.

Some states have prompt payment laws that regulate how much can be withheld from contractors, while other states don’t.  Some states have vague regulations, such as requiring that withholdings be “reasonable.”  You need to consult the rules in your state — take a look at the retainage map to see what the rules are in your state.

In some rare circumstances, withholding money from contractors can actually be required by state law. For example, according to retainage rules in Texas, the property owner must retain 10% on private construction projects. Under New Mexico’s rules, by contrast, withholding retainage is prohibited.

Generally, withholding amounts in a construction contract that violate state-imposed limits will be rendered invalid.

The problem with retainage

However, the practice is controversial, and many argue that it compounds the construction industry’s working capital and cash flow challenges, thus creating more problems than it solves.

Retainage is commonly withheld until the end of a construction project overall, rather than the completion of a particular contractor’s work. This means that contractors or subcontractors whose work comes near the beginning of a project may have to wait months or years to collect all of the money owed to them.

Unfortunately, it’s common for contractors and developers to abuse the retention practice in construction.  This is done in two ways:

First, it’s abused to “stay ahead.”  It’s a common construction practice to underpay a contractor for work done on a job. If, for example, 30% of work is completed, the developer or GC will only pay 25% of the price.  And then, also take out a withholding.  This is done to “stay ahead” of the subcontractor, to further protect the owner or GC.  This is an abusive practice.  You should check out the payment reputation and practices of your contractor to see whether anyone reports them engaging in this abusive practice.

Second, it’s abused by holding money too long or withholding high percentages. It’s common for contractors to have high amounts withheld from them (even when it’s limited!), and to have that money withheld for a very long time. Sometimes, contractors must have to make formal demands for retainage.

And there are other ways to abuse this practice, too. In one case of mismanagement of retainage, a GC tried to move retained money from one project to another, like some kind of evergreen deposit from a subcontractor!

Just like many other mechanisms related to construction payment, the retainage scheme can be abused. Accordingly, rules, requirements, and practices have been built into federal law and the laws of many states, with respect to retainage to promote its fair use and to prevent its abuse. The amount of the contract price that can be withheld and the time for which the retainage may be withheld vary by state (and federally), and be dependent on project type.

Retainage can be confusing. This is especially true because the rules are very specific and vary from state-to-state and job-to-job. It's important to pay close attention to the requirements and rules. Small mistakes can put your company at risk for withholding money improperly, or for losing out on being able to ever get your withheld funds! These frequently asked questions address common issues that you'll encounter when trying to stay ahead with the game.

How long is retainage withheld?

Retainage is typically withheld from a contractor throughout the entire duration of the project, and only paid after substantial completion.

However, because retainage is determined by the construction contract, the terms of withholding are up for negotiation. The payment provisions in the AIA A401 agreement, for example, allow for variable retainage, in which retained funds may be repaid or reduced after a specific milestone.

What is a normal amount of retainage?

Retainage is most commonly withheld at either 5% or 10% of each payment on a project. (See the Ultimate Guide to Retainage to learn more about retainage practices in the industry.)

However, because retainage is unregulated in many states and based on the terms of the contract, there can be a lot of variety.
https://www.levelset.com/retainage/#faq-item-3-how-is-retainage-calculated

How is retainage calculated?

Retainage is typically calculated as a percentage of each payment made during a project. If you are working on a $100,000 contract with retainage set at 10%, the total retained amount will be $10,000. But that total isn't withheld all at once. Instead, the 10% is withheld from each progress payment. Most payment applications have fields to calculate the retainage amount to withhold from the payment. The actual amount you receive will be the progress payment "less retainage."
https://www.levelset.com/retainage/#faq-item-4-when-can-i-file-a-mechanics-lien-for-retainage

When can I file a mechanics lien for retainage?

The short answer is: You absolutely have a right to file a mechanics lien if you haven't received your payment, and you can file a claim at any point up to the state's lien deadline.

However, contractors this common catch-22 when waiting for retainage: The deadline to file a mechanics lien is approaching, and will pass before the project is complete (signaling the release of your retainage payment). If you don't file your lien, the lien rights will expire, even if the retained sums are not due according to the contract.

There are other steps contractors can take to collect retainage faster. But when considering a mechanics lien before retainage is due, it ultimately comes down to a business decision for the sub/trade. You can use a mechanics lien to recover retained money, but that lien would need to be filed within the lien period -- and that deadline is strict. However, if you want to wait until the end of the project, you will likely lose lien protection. If retainage is never paid, you will then have to recover it some other way (making payment demands, taking the matter to small claims court, or even pursuing litigation).
https://www.levelset.com/retainage/#faq-item-5-why-is-retainage-withheld

Why is retainage withheld?

Retainage is often withheld throughout a job to protect the owner and/or general contractor against non-compliance, non-performance, and other project risks. The withholding practice is so common, in fact, calculating withholdings is built right into most standard payment application forms.

Retainage is also withheld due to a “pass-through” effect, since a contractor or subcontractor who is having money withheld from them is likely to pass on that percentage (or, in some cases, a higher percentage) to the parties with whom they subcontract.
https://www.levelset.com/retainage/#faq-item-6-how-can-i-collect-retainage-faster

How can I collect retainage faster?

Even if the contract stipulates that retainage is withheld until the completion of the project, you may be able to negotiate an early release of the retained funds, especially if your portion of the work is already complete.

Though not super common, retainage bonds are sometimes used to guarantee performance in exchange for the release of retained amounts.
https://www.levelset.com/retainage/#faq-item-7-whats-the-difference-between-retainage-and-retention

What's the difference between retainage and retention?

Retainage and retention generally both mean the same thing, though "retainage" often refers to the amount of money withheld, and "retention" refers to the practice of withholding that money. Learn more: The ultimate guide to retainage
https://www.levelset.com/retainage/#faq-item-8-does-retainage-change-according-to-the-project-type

Does retainage change according to the project type?

Retainage amounts and legal limits vary between private, state, and federal projects. The amount of the contract price that can be withheld and the time for which money may be withheld is generally dependent on the project type.

Can an owner occupy a building prior to releasing full retention?

On a project that I&#39;m working on, our scope of work has been complete since July of 2021 and the building has been occupied for roughly a year. We still haven&#39;t seen retention payment for this project. When do owners/GC&#39;s need to pay retention?

We have a project here in Davidson County / Nashville that we have filed a lien on for non-payment. Today the contractor sent over a lien waiver and a consent of surety to release retainage, whereas we are still awaiting payment on 2 progress payments. I think this is a ploy for the owner to side...

Does the state regulate how much money can be withheld from a subcontractor? How quickly must the contractor's retention be paid back? What is the process to demand payment of retention money? This map gives you a quick glance to better understand it all.

It’s common for retainage to get withheld from contractors on construction jobs all across the world. But, did you realize that it’s sometimes required to send specific notices and legal documents to maintain your rights to claim retainage? Otherwise, the general contractors, owners, developers, or lenders may just sit on the retainage and wait for subcontractors to take action.

Here are some forms and legal notices you may need to stay ahead on retainage. This is not a required document in any state, however, it can still be effective to speed up payments. By sending this notice, a claimant can... Iowa Notice of Request for Early Release of Retainage Form

In Iowa, a contractor may request the early release of retainage on a public project. However, notice must first be sent to all known subcontractors and...

Cash Flow: Things to Keep in Mind to Stay Ahead

Achieving profitability in the construction business can sometimes be more of a challenge than the work itself. Between the tight margins,...

Construction contracts are oftentimes lengthy and complicated. The contracts underlying a construction project form the basis of the relationships between the...

How Much Cash Does a Subcontractor Need to Start a New Job?

Here’s what’s really going on in the scenario above: the real reason why the subcontractor in the example above needs so...

Front loading a schedule of values is one way contractors and subs attempt to ensure steady cash flow, but there are...

One common question that many folks in the construction industry have is whether the Texas retainage rules apply to residential projects....

The practice of retainage, aka retention, has a tremendous impact on the construction industry. Learn how retainage works on different types...

Retention Bonds – An Alternative to Waiting for Retainage

A retention bond operates in the same way as retainage. It guarantees the work is done according to the contract specs,...