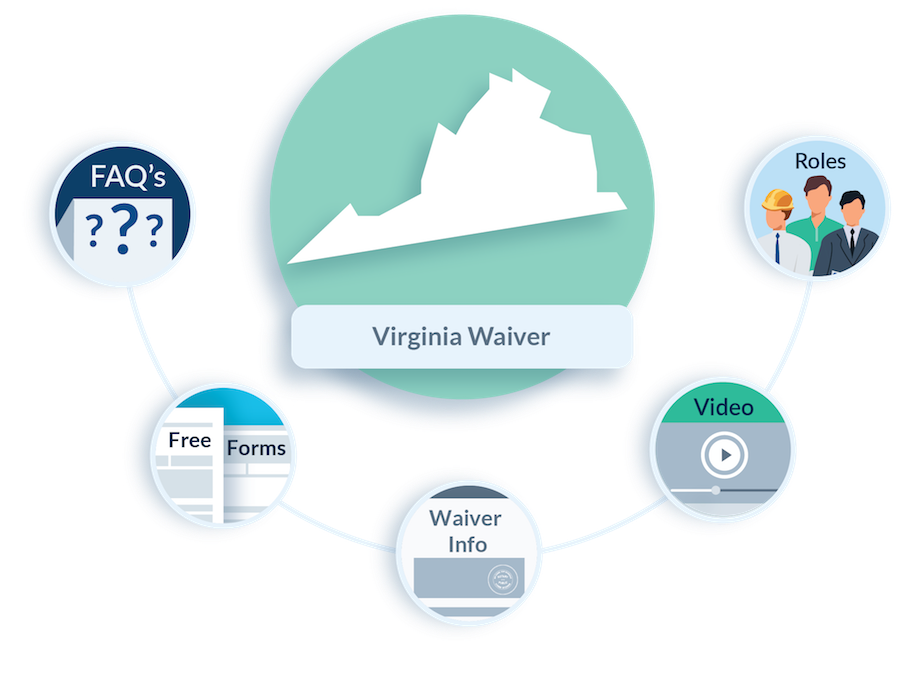 Virginia does not provide or require specific forms for lien waivers.

Virginia lien waivers do not need to be notarized in order to be effective, and they gain no benefit from notarization.

Can Waive Rights Before Payment

The rules surrounding Virginia lien waivers were modified in 2016. While there has been plenty of time for construction participants in Virginia to catch up with the changes, it is still possible to find Virginia construction contracts with profited “no-lien” clauses.

Prior to 2016, Virginia was one of the very few states that explicitly allowed lien rights for all parties to be waived prior to furnishing labor or material to the project by including an advance lien waiver in the contract itself. After the 2016 modification of the law, however, it became impossible for a “subcontractor, lower-tier subcontractor, or material supplier” to waive lien rights prior to furnishing labor or materials to the project.

This prohibition brought Virginia in line with most other states by disallowing the waiver of lien or bond claim rights prior to furnishing work, for most parties. It is worth noting, however, that direct contractors are not prohibited from waiving lien rights in contract prior to work. Direct contractors would rarely have a clause limiting their ability to use payment security like liens and bond claims in their contract, but if such a clause was included it would likely be enforceable. While the statute specifically mentions “material suppliers” as unable to waive lien rights prospectively through contract, it is worth being careful – a material supplier who supplies materials directly to the owner may not want to test their ability to waive lien rights in contract, despite the prohibition, since the clause seems specifically targeted to sub-tier parties.

It is also worth noting that the prohibition against advance lien waivers is limited to waiving lien rights in the contract prior  to work. There is specifically no prohibition on waiving lien rights after the work is performed or the materials are furnished, but before payment is made. In fact, that was specifically modified in the amendment so that such pre-payment waivers were allowed. Finally, whether clauses like “pay-when-paid” or “pay-if-paid” are prohibited or potentially work to waive lien rights is contentious and not entirely well-decided.

No, Virginia does not provide or require statutory forms for lien waivers.

General contractors are not restricted concerning lien waivers.  “A subcontractor, lower-tier subcontractor, or material supplier may not waive or diminish his lien rights, the right to assert payment bond claims, or the right to assert claims for demonstrated additional costs in a contract in advance of furnishing any labor, services, or materials” and any provision attempting to do so is unenforceable.

Is there a specific statutory prohibition on lien waivers in advance of payments, furnishing of work, or furnishing of materials in Virginia?

Must Virginia lien waivers be notarized?

No. Virginia statute does not require that lien waivers be notarized.

Hello, is it required in the State of Virginia for the lien waiver to be between the contractor and the owner of a property for...

How to file a lien in Virginia

Need to file a Virginia mechanics lien? File your mechanics lien with Levelset, the lien experts quickly and easily. Or you can follow the 3 steps below to file a lien yourself with Levelset's free information.
Step 1 Read How to File a Lien in Virginia Guide
Step 2 Download your Virginia Mechanics Lien Form
Step 3 Find your Virginia County Recorder
Accomack County
Albemarle County
Arlington County
Augusta County
Bedford County
See all Virginia Counties
File with the Mechanics Lien Experts

Virginia does not require specific lien waiver forms to be used in order for a lien waiver to be valid. This means that any template can be used, basically no matter what it says, and what additional rights are given up. Using these forms is safe, easy, stress-free, and fair for everyone involved. These forms are simple, easy to use, and don’t have surprises about what rights are being waived.

The forms provided here for free by Levelset are compliant with Virginia rules, and easy for everybody to understand. You can download them free, or use our free system to send or request your compliant Virginia lien waiver form.

These Virginia lien waiver forms are compliant with the state's requirements, and don't contain any surprises or waiver of additional rights. Make it easy, and use forms from the source you can trust. Helping Thousands Of Contractors
Like You With Virginia Lien Waivers